Online gambling can be a risky hobby if you don't know what to watch out for and the signs that a particular casino may not be trustworthy. There are thousands of disputes filed all over the world over scams an online casino has pulled on a guest.

There are many ways a casino can scam a player. Most often the casino simply refuses to pay. Imagine having the exhilarating experience of winning big only to discover the casino in which you won all the money refuses to pay you the money.

Do not trust Planet 7 Casino

The player waits to see the winnings in their account but they never come because the casino refuses to pay. Only after following a dispute through the Planet 7 Casino complaint system do they finally get a response. The casino is willing to settle with them and give them $2,500 worth of the winnings. That's just a small fraction of the original amount.

Not governed by a proactive country

It would be illegal and considered a scam or fraud to refuse to pay but Planet 7 Casino isn't in the jurisdiction of a country that would care. Planet 7 Casino is licensed out of Costa Rica. The licensing procedure in Costa Rica is simple. Apply for a business license and viola, you are good to go.

Costa Rica's licenses aren't specific to any particular business and are very easy to get. Simply put, there is no government oversight to plead your case to if you get scammed.

If you are considering gambling online you should do your due diligence on Planet 7 Casino complaints first. As I said, the list is exhaustive and their rating on the independent review sites are terrible. All credible review sites give Planet 7 Casino a rating from bad to among the very worst in the industry.

The Planet 7 Casino complaints shouldn't be surprising for anyone who is able to track down the parent company and its history. The casino has been operating since 2009 but that doesn't mean they are trustworthy.

A little detective work will lead you to who actually owns Planet 7 Casino. The casino is operated by Ace Revenue Group, which is in turn part of the Virtual Casino Groups. A short dive into the history of Virtual Casino Groups will have you wanting to choose another place to deposit.

The conglomerate of online casinos is well known in the industry for its history of scamming players and employing a refuse to pay practice. Any casino who is ultimately part of this entity should be met with a great deal of skepticism.

"A maximum of $2,500 will be sent per week. All balances will be sent the following week(s). This amount may vary due to processor availability."

So let's say you get a huge win of $20,000 and want to withdraw it all. Even if you're one of the lucky ones that Planet 7 Casino doesn't refuse to pay, you're looking at a minimum of eight weeks to get full payment.

Let's say you actually did receive your winnings in the form of a check from Planet 7 Casino, it's all safe and sound then right? Wrong. You may still need to file a Planet 7 Casino complaint.

Take a look at the casinos terms and conditions for checks. A full transcription of them is below. When you receive a payment by check, you must deposit said check to a financial institution within 30 days of issue. Any delay could result in the check no longer being valid. In this event the company is not responsible, and a reissue of the check payment will not be made. Checks must be deposited to your bank account and not cashed. Checks may not be endorsed to a third party. If any of the above conditions regarding checks are not met, the company will not be held liable; check payments will not be reissued.

That sure is a lot to stipulate. No wonder there are so many Planet 7 Casino complaints. 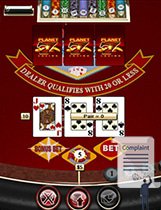 The casino's site even says some banks can take up to 45 to verify the check in which case it would be voided because it's longer than 30 days. You can't feel safe about the casino saying they aren't responsible for reissuing the check. They just get to keep the money.

They could simply claim the check must have been lost in the mail and if it's been longer than 30 days they don't have to do anything. You take all the loss. Certainly seems shady and untrustworthy.

There's still other weird rules and terms that are part of the Planet 7 Casino complaints. One, for instance, is that earned bonus money winnings can't be withdrawn all at once. The casino only allows a maximum of half your balance to be withdrawn. That's right. You could have $1,000 in your account but the casino limits your withdrawal to a maximum of $500. They'll refuse to pay the rest.

No wonder there are so many negative reviews on the internet for Planet 7 Casino that are easily found. The casino simply has a long history of bad business practices to cheat players out of money.

You won't find any reviews complaining about not being able to put money in. Planet 7 Casino has no issues accepting deposits. They can process a deposit quick and easy. They want your money. It is not a two way street though.

There are plenty of other, well reviewed, trustworthy places to entrust your money to online. Online gambling is a booming business where there are now dozens of reputable places to try out. Planet 7 Casino should not be a place on the list of potentials to choose from.